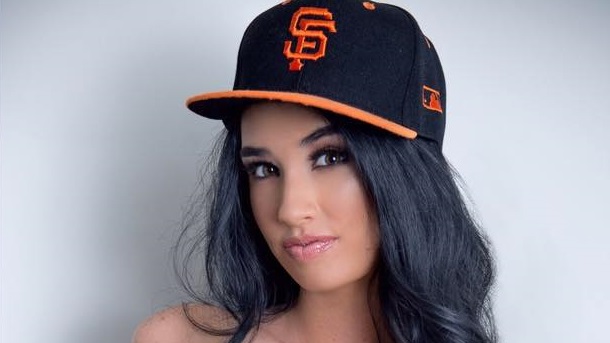 Earlier today we came across Iana Little, who was showing her support for the Oakland A’s and Golden State Warriors.

Now we come back to one of Guy Hut’s favorites, Paris Dylan, who is pretty much the hottest San Francisco Giants fan to ever walk the earth.

If you’re a loyal reader here, you’ve probably checked out Paris Dylan’s interview (with a second to come in the near future) along with some additional features. Now it’s time to focus on her love of everything San Francisco Giants related, especially Tim Lincecum because the girl wears his jersey like she’s doing it a favor.

#Repost from @mmason_photography with @repostapp — Grats to the SF Giants for winning the 2014 World Series… As awesome as Madison Bumgarner was he's got nothing on the #1 Giants fan @parisdylan550 #model #sfgiants #worldseries #bumgarner #madison #madisonbumgarner #parisdylan550 #mua #makeup #makeupartist #beautyofthesouls #mmasonphotography : Make up and hair by @beautyofthesouls

I could go on and give you more examples of her Giants love, but I’m pretty sure you’re already drooling uncontrollably over these Paris Dylan pictures and that’s pretty easy to see why.

But it doesn’t just stop at baseball. Paris loves football too as both Eli Manning and Sam Bradford are among her favorites, so if you’re a fan of the New York Giants or Philadelphia Eagles, you better hope those quarterback’s don’t switch teams any time soon because the girl can represent your team like no other.

Out apologies to those who love the St. Louis Rams as you lost a stunner.