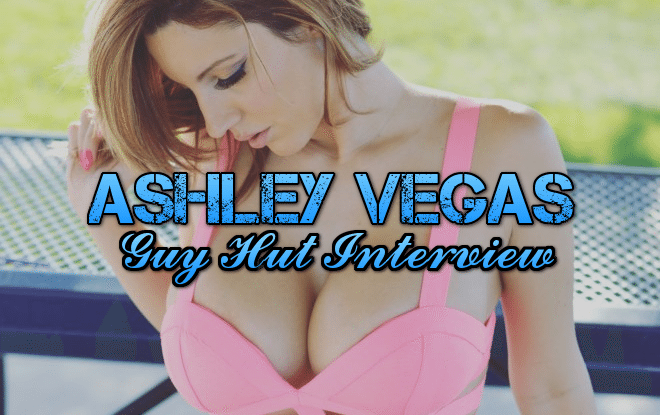 If you’re a loyal Guy Hut reader, then I don’t really need to introduce you to Ashley White – who you might know better as Ashley Vegas or even Ashlee Vegas.

A Las Vegas native, Ashley is routinely (read: daily) among the most searched names here at Guy Hut and it’s pretty easy to see why.

From the jaw dropping looks to the overly sweet personality, Ashley White has got it going on. Not to mention, she’s a pretty big video game fan as well. As if she wasn’t perfect enough….

Thankfully, Ashley was kind enough to sit down with us here at Guy Hut where she not only talked about what video games she’s currently playing, but a handful of other topics like her woman crushes, Ashley’s affinity to cause random drooling attacks and her fantastic website/blog AshleyVegas702.com.

Before you get too into the Ashley White Guy Hut interview though, make sure you check out her pictures below along with her infamous and beloved Banned By Instagram set.

My personal favorite might still be the melons picture though….

1) Starting with the basics – what are some of your current guilty pleasures? Who are you listening to music wise and what are you watching on TV?

Right now my current favorite TV shows are “Botched” and “The Amazing Race” which appeal to two completely different interests of mine! My guilty pleasure usually involves fast food, and lately I’ve been listening to a lot of indie and techno music.

2) We know you love your video games – what are you currently playing?

3) Speaking of video games, give us your top five video games of all-time.

In no specific order, my all-time favorites would have to be Zelda Ocarina of Time (N64), GameBoy Advanced Pokemon games, Assassin’s Creed Series, Watch Dogs (PS4), and Sonic the Hedgehog (Sega Genesis).

4) Let’s go with the typical question here – if you could have dinner with three people, past or present, who would they be and why?

Michael Keaton because he seems eccentric, funny, and intense. He was one of my first man crushes on my website. Have you ever looked at his Instagram? He has all of these photos of the newspaper and gets very into all of the issues.
Any U.S. President because their lives seem so fascinating. Imagine what is must be like to be the most powerful person in the world.
Gilda Radner because she was so funny and groundbreaking back in the early Saturday Night Live days.

5) We’re well aware of all your lovely pictures, but do you have a particular favorite picture and/or set that you’ve taken? And no, you can’t pick them ‘all’ because that’s our answer.

I loved taking pictures in Hawaii because it is paradise.

6) Tell us a little bit about your website AshleyVegas702.com and your new updates.

While I can never bypass social media completely, I thought it would be fun to have a site where I don’t have to worry about someone else’s rules, so I can post or write whatever I want. It’s also a sort of compilation of everything I post online, which isn’t always the same on each social site. And I can’t get deleted there!

7) If you were a Disney princess, which would you be and why?

Belle from Beauty and Beast because she seemed to sweet and liked to help people.

8) You’re routinely (read: every day) one of the most searched topics/names on Guy Hut’s website – what do you think separates you from so many others?

I think the key is just being consistent with social media promotion, and listening to what people want.

9) Are you much a sports fan and if so, what teams do you root for/favorite players?

I’m not a huge sports fan, but I love going to a sports bar to watch NBA, NFL, or college football games. I also like some of the bigger boxing events, too. I love the excitement and the crazy fans who take it so seriously. Sometimes the fans are more entertaining than the game.

10) What did you dress up as this past Halloween? And how many heart attacks did you cause?

Technically I think I was a cheetah. We were supposed to go to a house party, which never happened, so we ended up downtown at Fremont Street, which is always a bizarre night. Speaking of heart attacks, we did pass by the Heart Attack Grill, and you should see the sexy nurses they have working there.

11) It might not be Wednesday, but give us your top five woman crushes.

12) Would you ever pose for a men’s lifestyle magazine like Maxim or do you want to stay with the ‘amateur’ vibe?

I would totally do it, but that seems to be a completely different universe than amateur social media candids.

13) Why do so many social media sites like to disable your accounts and make us cry?

They seem to be trying to enforce a completely arbitrary standard. I don’t show any of the three vital parts, so they really shouldn’t have a problem with what I post.

14) What’s the best advice you’ve ever been given and what is something you can’t live without?

Best advice: Don’t worry about what other people think about you. And like most women, I can’t live without my phone!

15) We’ve had the pleasure of checking out some of your recent vacations thanks to your absurdly amazing pictures – what’s been your favorite vacay spot and where would you like to visit that you haven’t been?

My favorite place in the world is Hawaii. I’ve been there twice and it is truly paradise. The one place I haven’t visited yet is Europe, especially the UK.

16) Tell us what’s next for the beautiful Ashley White.

Just keep promoting myself and writing, and see where it all takes me. And I will continue to read Guy Hut 🙂

And you didn’t think we could leave you without some Ashley Vegas videos, did you!?

All pictures/videos property of Ashley White.