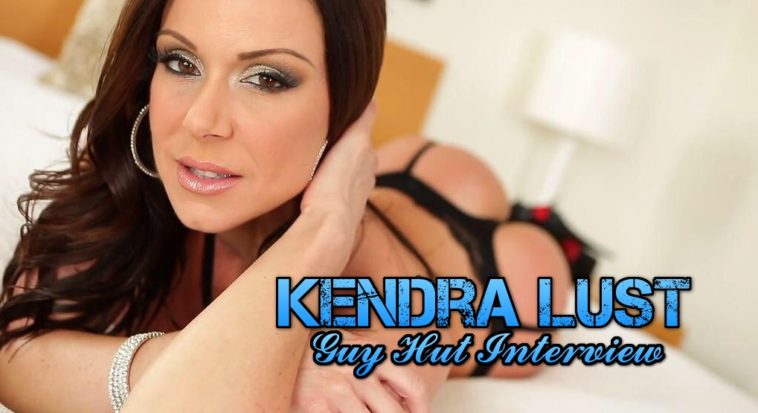 As one of the most decorated starlets in the adult industry, there aren’t many names bigger than that of Kendra Lust. Luckily, we here at Guy Hut were able to sit down with the Michigan native who dished on her favorite sports teams among many other topics, all while showing off her hilarious sense of humor and sweetheart personality.

If you were a Kendra Lust fan and member of the Lust Army (#LustArmy) before, you already know how awesome she is. But if you’re new to Kendra Lust, prepare to be blown away.

But before we get to the actual interview, make sure to check some of these stunning Kendra Lust pictures:

Guy Hut: Tell us some of your current guilty pleasures in music, TV, movies and/or books.

Kendra Lust: My taste in music varies so much it is hard to say what I enjoy most. Hip hop always puts me in a good mood! Fifty Cent, Jason Derulo, Drake, Lil’ Wayne, MC Breed, and Tu-Pac are some of my favorites. When it comes to TV I love True Crime and Forensic Files…yes I am a little bit nerdy and love science! Nurse Jackie, Shameless and stand up comedy is awesome! Kevin Hart is hilarious! I enjoy reading however, I have been busier than ever and wish I had more time to read 🙁

GH: I know you liked Jersey Shore – who was your favorite character(s)?

KL: I loved Pauly D. He was laid back with no drama and just rolled with things. My style completely!

GH: You played sports when you were younger – what were your favorite to play?

KL: My first love will always be basketball. My dad was my first coach and I remember in first and second grade dribbling around chairs after school. I didn’t like it then but realized in middle school and high school how important it was. The fundamentals and defense are the most important things to remember in team sports. I also liked playing softball but basketball was my baby.

GH: Some people might not know that before you got into the industry, you were a nurse. What were your favorite thing(s) about it?

KL: I was a Registered Nurse for about 8 years. Working and taking care of people when they are sick and vulnerable is an honor and I truly loved my patients. I consider myself a compassionate person and when someone is sick they need a person who wants to be there for them. At times I really miss working as a nurse so to fill the void I try to do charitable deeds and fundraisers. Maybe its selfish but I receive great pleasure when I am able to make someone smile or help them feel better. It does not take much to make someones day or make a difference.

GH: You were a 34D in high school – what was that experience like? Did you have guys eating out of your hand?

KL: I was a late bloomer so for me it was like “Whoa where did these come from?!” LOL! It was nice to finally get boobs after waiting what felt like forever but then they kind of got in the way! Maybe a few guys were eating out of my hand ha ha:)

GH: If you were a Disney princess, who would you be and why?

KL: I would be Belle! I love dark hair and think Belle was the prettiest of them all.

KL: Christmas is my favorite time of year especially since I live in Michigan. Snow, comfort food, family, Christmas decorations, and traditions make me so happy.

GH: Would you rather go on a beach vacation or to a snowy mountain cabin retreat?

KL: It depends on who I am with. It would be nice to relax in a mountain cabin with good company. I could think of more than a few ways to keep us warm…..

GH: What’s your favorite place to travel and is there any place that’s on your bucket list?

KL: My favorite place to travel are places with a lot of history and nice weather! It reminds me of my childhood when my parents would take us on family vacations and in the back of my mind I felt like it was more like a field trip! My dad was kind of like Clark Griswold!

GH: What was your last dream about?!

KL: I had a dream of a loved one who passed away… I wish it was a hot and wild sex dream with Channing Tatum or a sexy WWE Wrestler but sadly that wasn’t the case.

GH: As mentioned above, you partook in sports during high school and still play basketball. Do you have any favorite teams/players?

GH: If you have any, what are your expectations for your favorite teams coming up?

KL: Tigers should at least make the postseason and the Lions have a good chance to make a run into the playoffs. The Wings are always Cup contenders in my opinion. I wish I had more to say about the Pistons!

KL: I still have a pretty good crossover however, crossover on Kobe I don’t think so.

GH: Much like Tanya Tate (who has her own Guy Hut interview), you’re a big WWE fan – who are your favorite wrestlers currently?

GH: Tell us one thing about Kendra Lust that most people wouldn’t know.

KL: I still love to play basketball and my elementary school still has my name on the gym wall for being the fastest runner in the 5k…boom!

GH: If you could have dinner with any three people, past or present, who would they be and why?

KL: Michael Jordan because he was the greatest basketball player to play the game and I think he would be very interesting to talk to. Florence Nightingale since she was considered a philosopher of modern nursing, she helped to formalize nursing education and took care of the ill soldiers during the Crimean war. Her work and accomplishments inspire me. Lastly, Channing Tatum….because I want to seduce him at dinner and have him for dessert!

GH: If there was a historical event or time in history you could attend, what would it be?

KL: 1989 Pistons Championship….wish I was there! On a serious note probably the passing of the 19th Amendment ultimately, giving women in America the right to vote.

GH: You have three wishes – what are you asking for?

KL: Good health for myself, family and friends, yes I am saying it…world peace because I despise all of the senseless violence and killings and just to live a prosperous and happy life.

GH: If you weren’t in the industry, what do you think you’d be doing? Still in nursing? A veterinarian? Hustling people out of their money at pickup basketball games?

KL: Ha ha! I would probably still be working as a nurse and in school for real estate. Real estate has always interested me and a back up plan is essential in life!

GH: What’s the best piece of advice you’ve ever been given?

KL: To enjoy the moment, live life by your rules and don’t worry about what other people think. Life is short so live, laugh and love.

Keep up with Kendra Lust: