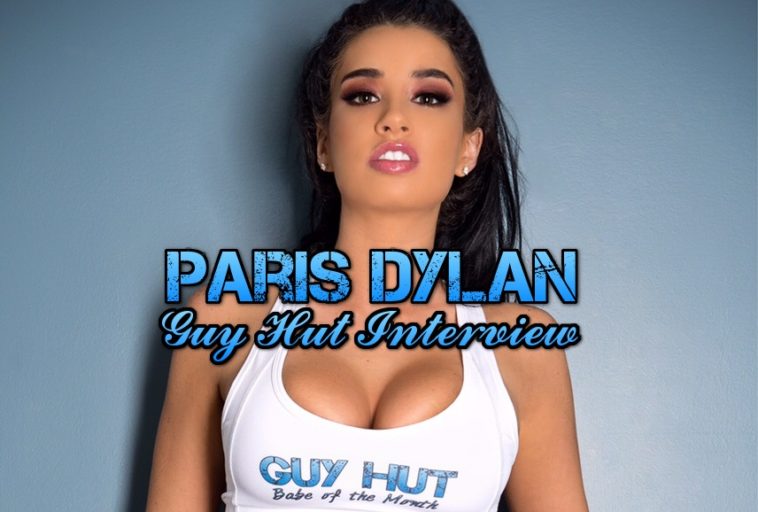 Assuming you’re a loyal Guy Hut reader, you know all about Paris Dylan. We’ve featured the model countless times here on the site, and for good reason. Not only is she beautiful (obviously), but she’s a total sweetheart and a barrel of laughs. You probably could have figured that out by reading Paris Dylan’s first Guy Hut Interview which was so popular, we had to bring her back for a second.

I’m guessing this won’t be the last either, because the girl is pure fire.

Paris was also kind enough to wear some Guy Hut clothing and pose for a few pictures, which will undeniably have your jaw hitting the floor.

GH: We know you love NWA – what’s your favorite song(s)?

PD: They have a lot of amazing songs but I literally know EVERY word to F*ck Da Police. I also really like Boyz n The Hood.

GH: A lot of your crushes have been Saturday Night Live cast members. Any favorite skit(s)?

PD: I love the Tunnel of Love skit where they are acting robotic, Dooonese, the Donatella Versace skits and anytime Adam Sandler sings <3

GH: If you were a Disney princess, who would you be and why?

PD: I’d like to be Snow White so I can have Bob Dylan, Don McLean, Mark Ruffalo, Jakob Dylan, Adam Sandler, Tim Lincecum, and Zack De La Rocha as my Seven Dwarfs.

GH: What was it like to be featured on MTV’s Catfish/Chatfish? Nerve wracking? Weird? Fun?

PD: I wasn’t nervous, I was very excited to go on and tell about all the fake accounts of me because there are SO many of them. It was a lot of fun overall.

PD: Cherry with just a little bit of the lemonade in it.

PD: I like Pop Tarts way better. The strawberry ones with the frosting and the Smores ones.

PD: Christmas because I get to track Santa on NORAD, so exciting.

PD: I like socks, I have a million pairs. Socks are so sexy.

GH: Would you rather go on a beach vacation or to a snowy mountain cabin retreat?

PD: Both of those sound awful to me honestly, I would much rather vacation in a city like LA or NYC.

GH: We know you like you play The Sims. Anything odd ever happen, like setting your bathroom on fire?

PD: Okay, so my guy Sim Simon came home from a club and all of a sudden a beam of light went over him and then you see a UFO and Simon was sucked up by a woman alien and got him pregnant…I guess she found him irresistible because this happened at least 3 more times..

PD: I find it really crazy that me and my car, LeRoy, can actually communicate with each other.

GH: Tell us one thing about Paris that most people wouldn’t know.

PD: That my boobs are 100% real. I’m constantly asked and its really annoying. People will read this and STILL ask me.

GH: Do you know the Muffin Man?

PD: No, I’m much more interested in the Hulk Man right now *hinting at Mark Ruffalo* 😉

GH: What was your last dream about?!

PD: I had a dream that I was at a Halloween party and met this beautiful man that looked like Richard Quest dressed as Captain America and he wanted to take me out so we had coconuts with straws on an exotic beach while listening to the song Suavecito by Malo. God how I wish dreams could come true!!!

GH: Somebody gives you a $1,000 dollar gift card which can be used at all the stores in the mall – what are you buying?

PD: Oh my god I’d go into Sweet Factory and gets bags and bags full of candy.

GH: Who do you have in a fight? Woody from Toy Story, Super Mario Or Waluigi?

PD: Oh god, I’m attracted to all these characters physically this is so hard!! I’d have to choose Waluigi because hes sexy and tough!

GH: If there was a historical event or time in history you could attend, what would it be? For example, going to Woodstock, being in Egypt during King Tut’s reign, etc.

PD: Being in Egypt during King Tuts reign would be AMAZING but I’d have to say Woodstock.. There you got good music, nobody cared about anything, and tons of hot hippie men.

GH: You have three wishes – what are you asking for?

PD: Right now, to be on the beach with Richard Quest, fight all battles with Waluigi, and to be dancing away at Woodstock with all the hot hippie men.