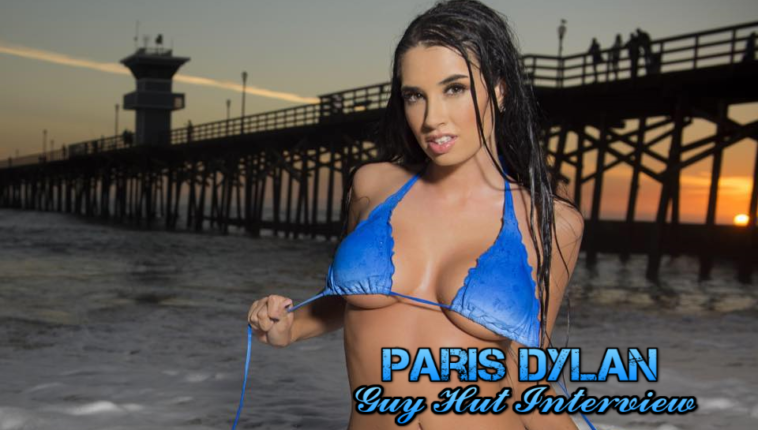 Meet Paris Dylan. You’ve probably come across the internet sensation on more than one occasion, possibly without even knowing it. But the So Cal native isn’t just one of the hottest names in modeling, she’s also a massive sports fan. From Tim Lincecum and the San Francisco Giants to Sam Bradford (and whatever team he may or may not be playing for in the coming months), Paris reps her boys continuously and can hold her own with the most obsessed stat geek.

Below is Guy Hut’s interview with the incredibly sweet and talented Paris Dylan (also known as Paris Roxanne), who’s going to look real familiar in the coming weeks if you’re a fan of MTV’s Catfish:

Guy Hut: While I know you’re a huge fan of both Bob Dylan and Don McLean, are there any other music acts that you’re listening to right now? What about TV and/or movies? What has your attention at the moment?

Paris Dylan: Right now besides Bob Dylan and Don, ive been listening to Jakob Dylan, Modest Mouse and some Tears For Fears.. From each of those I have a favorite song, right now its Break It Down – Tears For Fears. As far as TV and movies, Saturday Night Live has been what ive been watching a lot, movies its always an Adam Sandler flick.

GH: One thing you like to do is attend conventions like Comic Con and Wizard World and do so in costume. Do you have a favorite outfit that you like to wear?

PD: I love dressing up for the Comic Cons! I love Loki so that’s been my favorite costume so far..

GH: From one So Cal native to the next, who you got in a battle of burgers? In-N-Out or Five Guys?

PD: Ugh this is a hard one… Both have good things about them… I think I have to go with Five Guys because the burgers are much more like REAL. and the fries are amazing.

GH: While you’ve been able to visit a handful of wonderful places, is there a particular destination (or several) that are on your bucket list?

PD: Yes. I have always wanted to go to London ever since I was little. London, France, Germany, Holland and Spain.

GH: Tell us your favorite thing about modeling. Also, what’s the biggest downside to being a model?

PD: I love good makeup and hair… A downside is having to watch what I eat.

GH: If you weren’t modeling, what do you think you’d be doing career wise?

PD: If I wasn’t modeling I would focus more on a career in acting.

GH: If you had to give one piece of advice to a group of people, what would it be?

GH: You’re a huge sports fan – for those unaware, who are your favorite players/teams?

PD: Well, Tim Lincecum is my most favorite ever… I love the SF Giants… For football I like Sam Bradford of the St Louis Rams.

GH: Tim Lincecum of the San Francisco Giants, one of your favorites, has spent the offseason working on fixing up his game. Do you think we’ll see The Freak of old this year?

PD: Possibly. He needs to ditch the girlfriend and call me haha.

GH: There have been reports about a potential Sam Bradford trade with the Cleveland Browns and Buffalo Bills showing interest. Are you ditching the Rams if they trade Sam? Or is it all about Eli Manning?

PD: Yes, I will have to ditch the Rams and follow Sam wherever he may go. I do love Eli though.

GH: Indycar is also something you’re a big fan of, correct? Who are your favorite drivers and have you had a chance to get behind the wheel at any point and experience the rush?

PD: My favorite drivers would have to be Ryan Briscoe and Will Power. No I never got behind the wheel, I leave that to my little sister.

GH: You just had your 21st birthday (Happy birthday) – did you get everything you wanted? More importantly, did Bob Dylan get you that ring yet?!?!

PD: Yes I got everything I wanted. I am still waiting for that ring Bob….. 😛

GH: One thing that is of interest to you is Egyptian history, namely King Tut. What sparked your love of that? And what was your favorite part of his exhibit at the Natural History Museum that you attended?

PD: Watching Steve Martin back in the 70s perform ‘King Tut’ on SNL sparked my love for King Tut, or otherwise known as Bae Tut to me 😉 My favorite part of the NHM was seeing his mummy and reading about an incident where he was racing his chariot and fell off and broke a rib… I find that so damn cute

GH: If you could have dinner with three people in the history of the world, they would be….

GH: In five years, where do you see yourself?

PD: In 5 years I see myself hopefully finally meeting Zack De La Rocha from Rage Against the Machine *swoon*.

Want to keep up with Paris?

Watch Paris in Go Getta’s music video for “You Look Good” and make sure to watch Paris in MTV’s Catfish on April 1st:

All images courtesy/property of Paris Dylan /Paris Roxanne / and/or photographers.