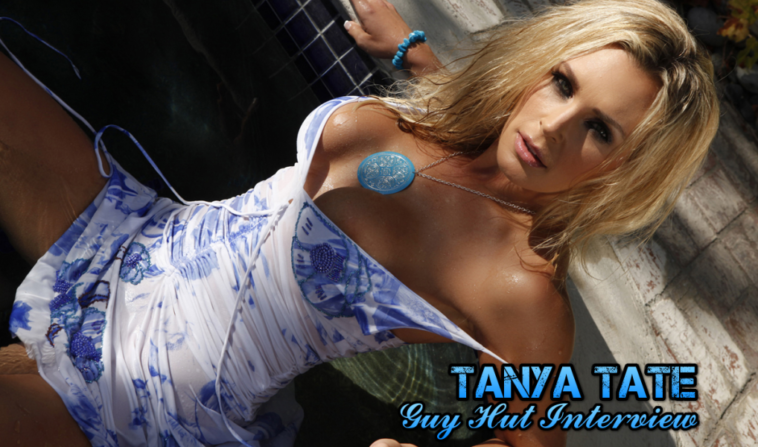 The Liverpool native isn’t just sweet and beautiful but she’s also a huge sports fan as we found out in Tanya Tate’s Guy Hut Interview, which you can read below.

Guy Hut: Starting with the basics, what are some of your guilty pleasures right now? Perhaps your favorite TV shows? Music? Books? Movies? What has Tanya Tate’s interest right now?

Tanya Tate: UK soaps Eastenders and Coronation Street, I still keep up with the storylines even though I live in the US. I love everything 80’s music, from Erasure to Human League to The Police. I recently went to a Spandau Ballet concert and am hoping to go the The Smiths and Morrissey convention taking place in LA in April.

GH: While you’ve traveled the world and seen plenty of things, is there anything you’ve yet to experience that remains on your bucket list?

TT: Oh my yes, I am actually one of those people who has a wish-board and have plenty of things on there I still wish to accomplish. A couple of them every checked off recently, like I’ve been on a safari in South Africa, last weekend I went to the gun range and learned how to properly use a gun. One of things I really want to do is jump out of a plane, so that’s probably the next on my list.

GH: It’s always intriguing to get to know what interests a person, so name three people who you’d love to have a dinner date with – past or present. And why would you pick them?

TT: Billy Connolly, Catherine Tate and Gary Barlow. Billy and Catherine are my favorite comedians. I think I would have the time of my life just listening to them talk and banter, I would love that. Gary is my favorite singer of all time. And we grew up in the same area! So I think we have a lot to talk about.

GH: While many in the industry are just performers, you go the extra mile and run Star Factory PR (not to mention handling a handful of other tasks, like directing, etc). What made you decide to start Star Factory and what has the experience been like?

TT: It’s weird, I studied a bit about this industry before I got into it. And when I got into it I was already about to enter my 30s. So I knew I had a finite time in front of the camera much shorter than most new performers who are just getting into their 20s.

So I knew I had to have an exit strategy. And as I was getting going and I was also planning on how I was going to get out, which would include getting behind the camera as a director and establishing a website etc. When the opportunity arose to become a publicist I thought it was a good move it would keep me working within the industry and it was something that would be beneficial to my own career.

GH: Now we know you love your Liverpool Football, how happy are you with their season so far and what type of improvements would you like to see moving forward, if any?

TT: I am okay with their season. Things can always be better, of course. Last season they played really strong and where even top of the league at times. They are lacking strong consistent strikers since loosing the biter Suraez. Mario Balotelli just scored his first goal for Liverpool and over half a season has passed him by. Now with the news Stevie Gerrard is moving to LA Galaxy that is sad for Liverpool. He is still a strong player for the team he will be missed. The only good thing is I will get to see him play still with myself living in LA. Sometimes they finish a match really strong, I just wish they started with that same energy and really set the pace. They need consistent strong matches.

GH: In addition to football, you also have a special place for WWE. Do you have any current and/or past favorite wrestlers? If so, who, and can you give us a Rick Flair impression? Wooo! Just kidding on the last one, sort of.

TT: I’m a big fan of Sheamus, Bad News Barrett and Paige. I support my English and Irish. I’m also a fan of Dolph Ziggler as well. I’ve been going to a lot of shows, whenever they are in LA, I make sure to be there.

GH: You’re also into cosplay and you have your own superhero, Lady Titan. If push came to shove, is she a Batman or Spiderman kind of girl? Or perhaps would she go for Hulk? Or would she just kick the ass of all three?

TT: I would think she would be all about Thor and his big hammer.

GH: Running down your list of career accomplishments is rather impressive, so out of all of them, what are you most proud of?

TT: It’s really hard to choose because I am happy with so much of what I have been able to accomplish, that to pick one seems to diminish the others and I something I don’t want to do. But I mean, being on the cover of FHM magazine, that is still something that I impress myself with. I never thought that ever happened to me, it was something that I didn’t even consider in the realm of possibility, but it happened.

Being on the cover of AVN magazine was also a milestone for me. AVN is the trade magazine of the my industry and there have been bigger stars than me who never had the opportunity to be on the cover, but I did and It’s a great feeling.

I can go on, …winning the awards, each one is special for its own reason from the SHAFTAs to the XBIZ to NIghtmoves to the Fannys, they all mean something to me.

GH: What’s the best advice you’ve ever been given and why?

TT: “Know what you are worth,” that thought has helped me make decisions and guide my career. I know what I am capable of and what I have invested in my self, I’m not going to take less.

GH: Along with cosplay, you’re also a pretty big Disney fan, correct? Who are some of your favorite characters? And have you found a way to spend a night in Cinderella’s Castle yet?

TT: My favorite character without a doubt is Mary Poppins. That is without a question. I love films like The Jungle Book, Alice in Wonderland, Peter Pan, Snow White…I can go on. I love them all. I’m such a huge fan that my house populated with Disney and Disneyland memorabilia. In my living room I have huge Mickey and Minnie Mouse cuddly toys sitting there keeping me company. Something for my bucket list is having an invite into Club 33. If I was to stay it would have to be Walt Disney’s personal apartment above the fire station.

Want to keep up with Tanya? Make sure to follow her on social media:

All images property of Tanya Tate and Star Factory