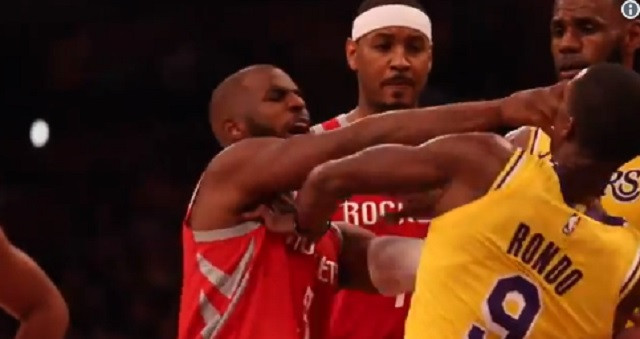 Just when you thought the Rajon Rondo – Chris Paul fight couldn’t get any more outlandish, it does.

Things got heated between the two former All-Star’s after Paul alleged Rondo spit on him, something video evidence suggests to be true.

After a few punches were thrown, the two were separated but the drama didn’t end there.

Chris Paul throws punches at Rondo for allegedly spitting on him ,….brawl breaks out pic.twitter.com/1k1a7jRunY

That’s because the two ladies decided to continue the brawl…

What happened next or how serious the altercation between the two, remains unknown.

As for Chris Paul, he was fined and suspended by the NBA for two games. Rajon Rondo, also fined, was suspended for three longs while his Los Angeles Lakers teammate, Brandon Ingram was given the harshest suspension of 4 games as the NBA office deemed Ingram to be the largest instigator of the on-court brawl.