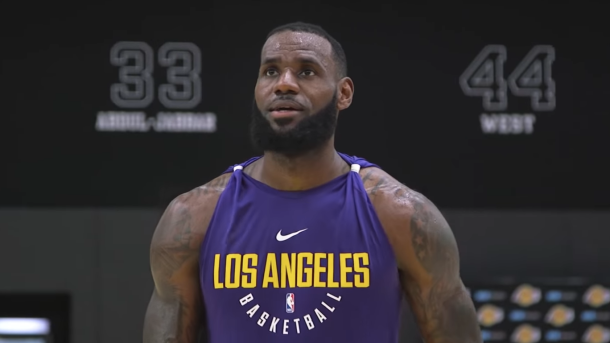 Physically threatening your teammates probably isn’t the most enduring way to make a first impression, but if you’re LeBron James, you can do whatever you want. And that includes suggesting you might break a few noses in the process.

The Los Angeles Lakers forward, who is known for some of his fastball-like passes, wasn’t exactly thrilled when a few of his new teammates struggled to handle one of his passes.

That lead the NBA All-Star to suggest his Lakers teammates better be ready for his dimes, otherwise they’re going to be dealing with a broken nose.

According to Rob Pelinka, a teammate dropped LeBron's pass the other day because he didn't expect it, leading to this exchange:

LeBron: "Well get your hands ready, or I'm gonna break your nose!"

“I think the thing they’re going to come to and I think a lot of guys are going to have to deal with this. There’s who you expect to be and then who you are when you play with LeBron. It’s two different things. I don’t know if they truly understand what it’s like to play with him because there is no room for mistakes. Because in all actuality, he could do it himself. He could lead a team to 40 wins by himself. I think for all of them they’re going to have to have a reality check, not only them but the people around them. There’s going to be say, not a growing period, but a humility.”