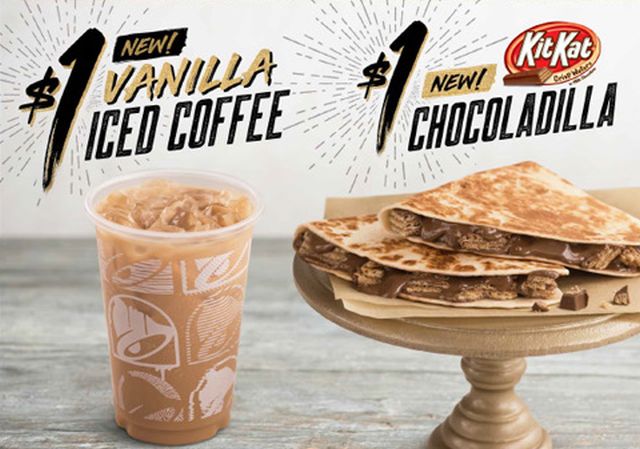 Quick, somebody go find me a shark, because we need to jump over it and it’s all thanks to Taco Bell and their newest ‘invention’.

In all seriousness, this probably isn’t all that bad considering it’s just a toasted/grilled flour tortilla with melted chocolate in it, but still. Appearance is just as important as the taste and that just doesn’t look all that visually appealing.

Regardless, the Kit Kat Chocoladilla is currently being tested at Taco Bell restaurants across the country alongside Vanilla Iced Coffee.

The Kit Kat Chocoladilla features melted chocolate and Kit Kat pieces folded and grilled in a flour tortilla. If it sounds familiar, the chain offers a chocolate quesadilla called the “Chocodilla” in several countries abroad (they might be going with a different name here in the US due to the similarity of “Chocodilla” to “Chocodile,” the name of a Hostess snack cake). In fact, they were selling a Kit Kat Chocodilla in the UK around this time last year.

Both are selling for $1 dollar at participating locations.